Niella Tanaro becomes part of the Cisalpine Gaul province after the Roman conquest, under the jurisdiction of the chief town Augusta Bagiennorum. Nigella ad Tanagrum (Niella Tanaro) is mentioned in documents in year 901 as an imperial donation to Bishop of Asti who delegates the local government first to Marquis Del Vasto and then to the Marquis of Ceva who takes possession in 1142.
The town is crossed by Via Bagienna (as well as Via Palmaria and a Route of Salt), making it an important town in medieval times. It becomes a strategic link between the most important cities of Piedmont centers and Ligurian ports, among which commercial, economic, cultural, and business exchanges take place.
There is also evidence of pilgrims journeying on the route, given the dense dissemination along these paths of kiosks, chapels, oratories, and the presence of a hospital in Niella. 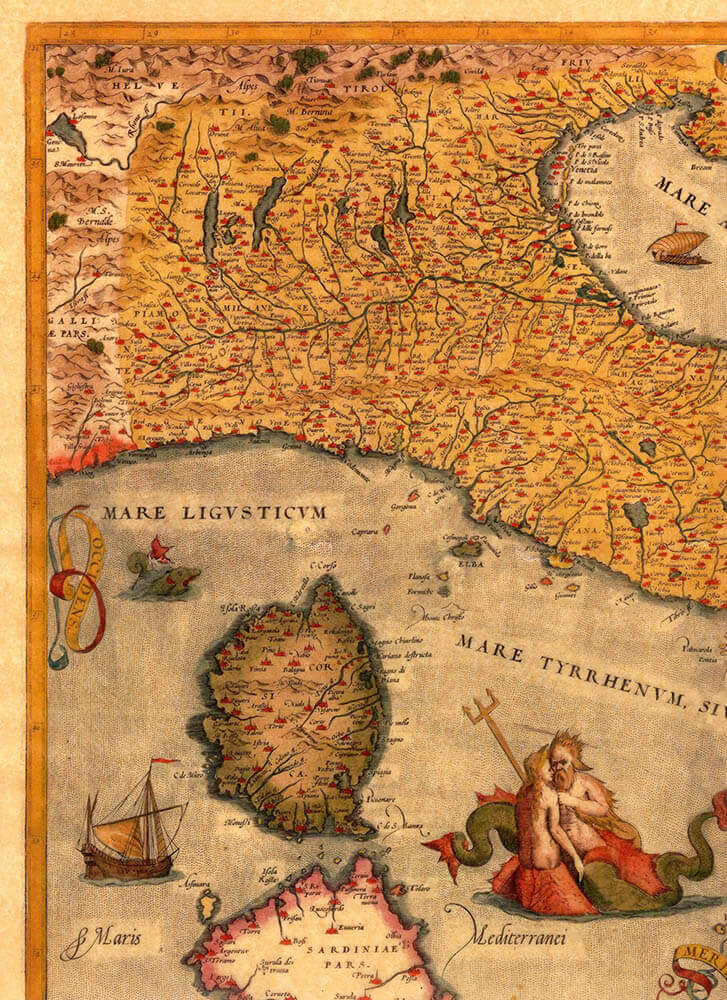 The construction of the Niella Tanaro Castle probably took place between 1125 and 1160. It was the period when the Castrum Nigella was included in the Marquisate of Ceva with the act of dividing the lands of the Marquis Bonifacio in 1142. In the following years half of the marquisate was sold to Asti (1295) by George II, nicknamed the Dwarf, and in 1299 the sons of Guglielmo III of Ceva took possession of it. 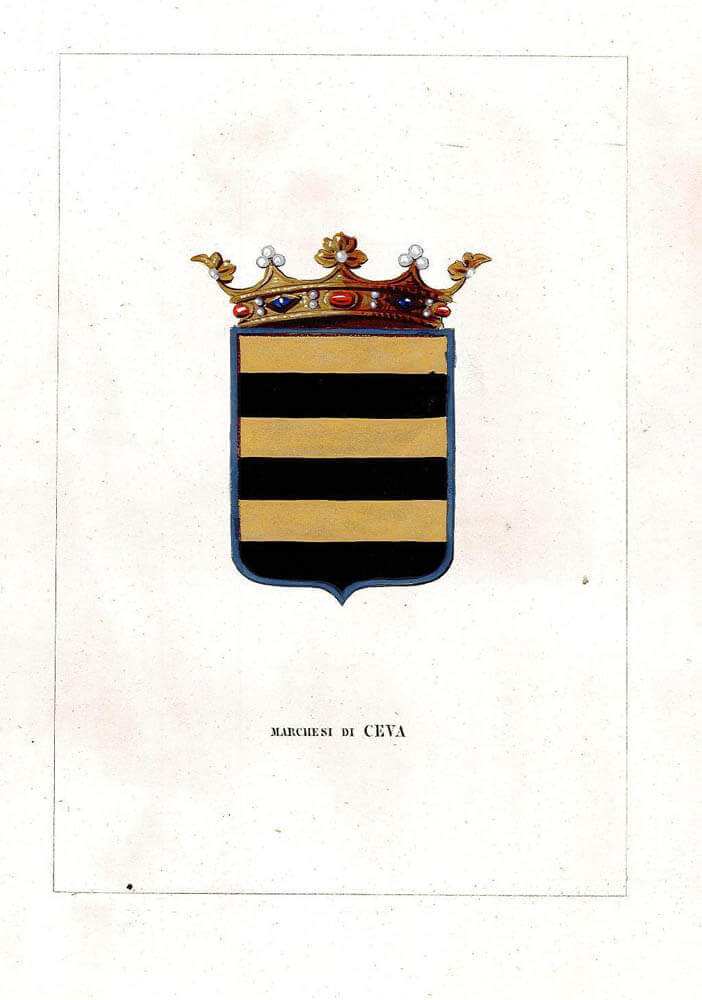 The domain of the Marquis of Ceva continued until 1530 when Asti passed it to Catarinetta Spinola and then in 1532 to Giovanni del Caretto. It was later under the Sauli and finally under the Conte Coardi di Carpeneto who owned it until the period of restoration. 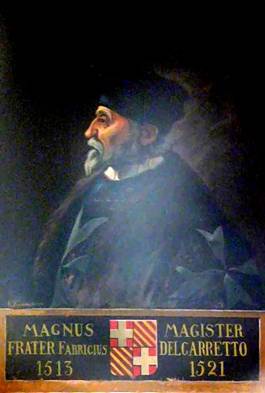 At the end of the 18th century, Niella, like many other municipalities of the area of Monregalese, was involved in the first Napoleonic campaign in Italy. In 1795 and 1796, the town hosted the royal troops and the Piedmontese and Austrian cavalries who were allied against Napoleon and his army. On April 18, 1796, the French troops broke through the trenches at the nearby Bicocca (Battle of the Bicocca San Giacomo). Napoleon imposed on Niella a contribution of 12,000 lire and, due to his threat of “looting and burning,” people were forced to amass food and fodder in chapels. 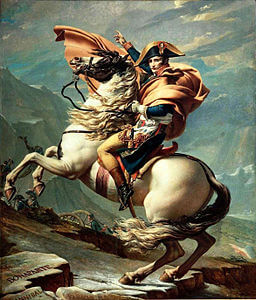 The purchase of Andrea Piovano

On October 30,1807 Count Coardi of Carpeneto sells his castle to his sharecropper Andrea Piovano. All the lands, the castle mill, as well as the noble bench in the parish church B.V. Assunta go to Andrea Piovano. 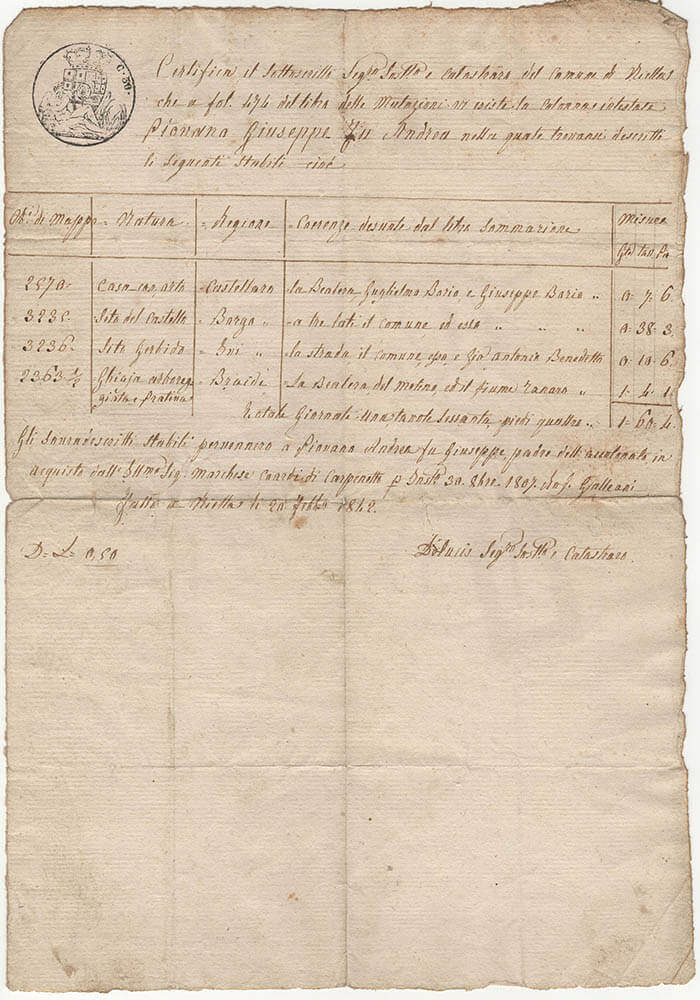 The etching of Francesco Gonin is the first visual document of the castle and dates back to 1852. Some architectural asymmetries reproduced by the artist suggests a personalization in the graphic reproduction. 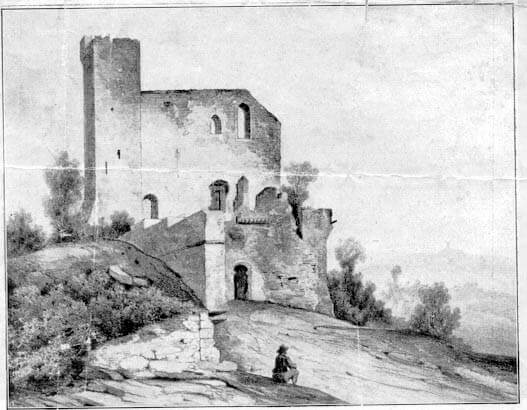 A descendant of the Piovanos

In this picture taken in the late 1800’s you can see Domenico Piovano ”Chin,” a very determined man with a strong sense of initiative. With his brother Pasquale he took care of the lands adjacent to the castle. In order to exploit these lands as best they could, he had the idea of refining the soil by extracting all the stones up to a depth of 1 meter (this work was done manually over a surface of about 3000 sq meters). Inside the tower he also built a rainwater collector to use for irrigation. The two brothers never married. Pasquale died during WWI on January 7, 1918. Domenico died on October 12, 1937 in Niella. Thereafter, the property of the castle went to their sister Lorenzina who was married to the shoemaker of Niella, Giò Matteo Benedetto. 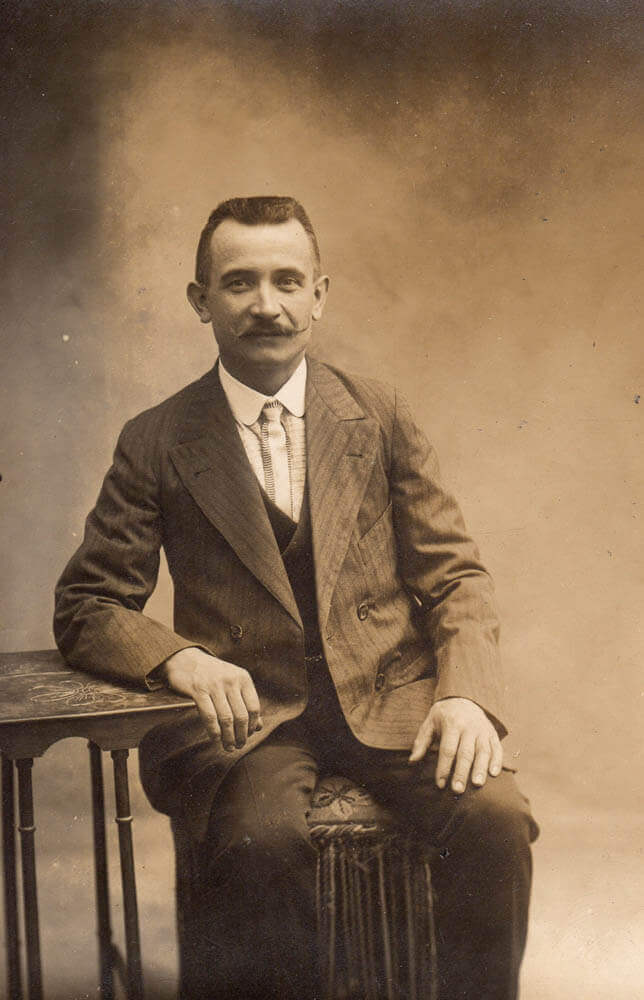 For a time it was considered fashionable to spend a day at the castle. In this photograph there are some local villagers. The first from the right is Baratteri Gulglielmo “Guglielmin”. He is posing with his daughters and some admirers. The castle is seen from behind and a part of the roof is completely missing. You can also see that the vineyards occupy a large part of the land. 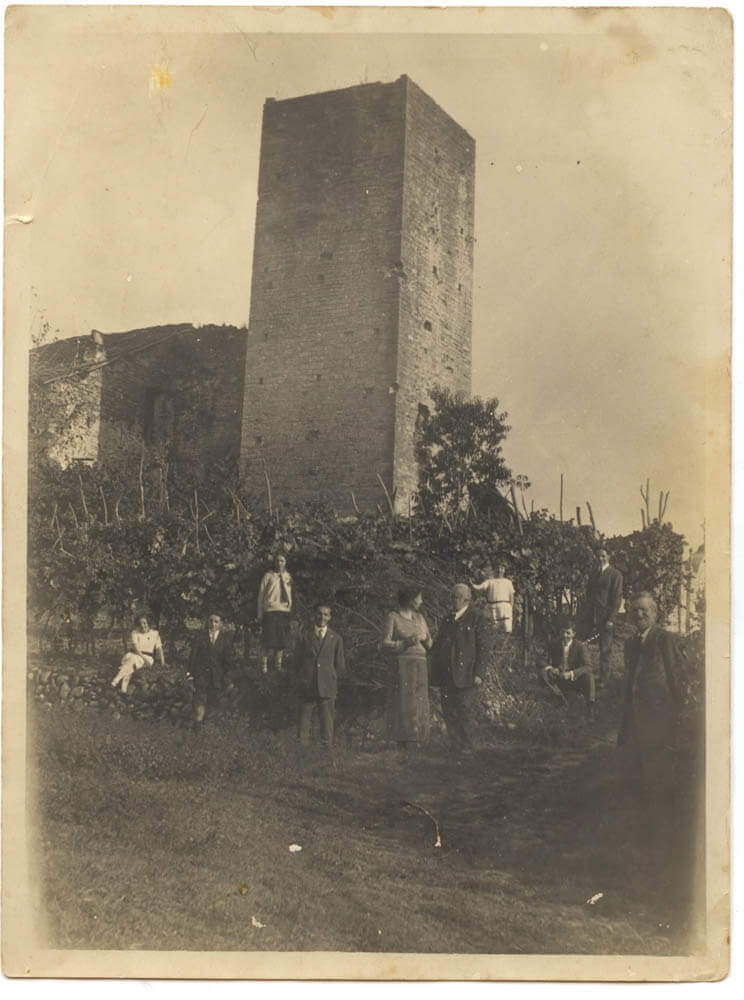 This is also among the first documented photographs of the castle. The front yard had not yet undergone any restoration, while at the base of the tower a crack is clearly visible: a fired cannonball of Napoleon’s Army? 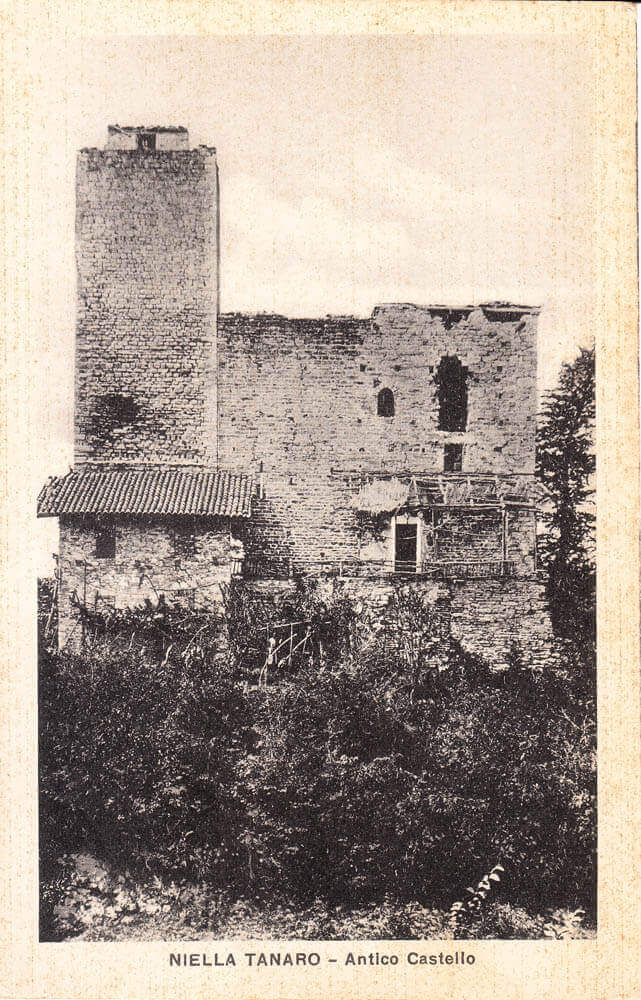 In the early 1900’s the part in front of the tower was affected by a fire that caused the roof to collapse. Traces of the fire can be seen on this postcard dated Dec. 22, 1916. 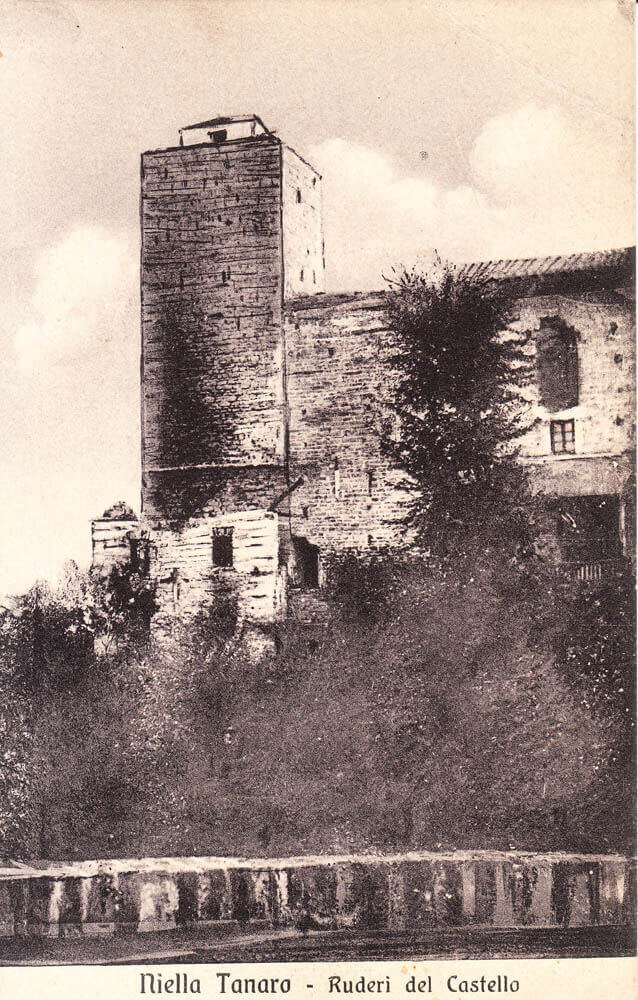 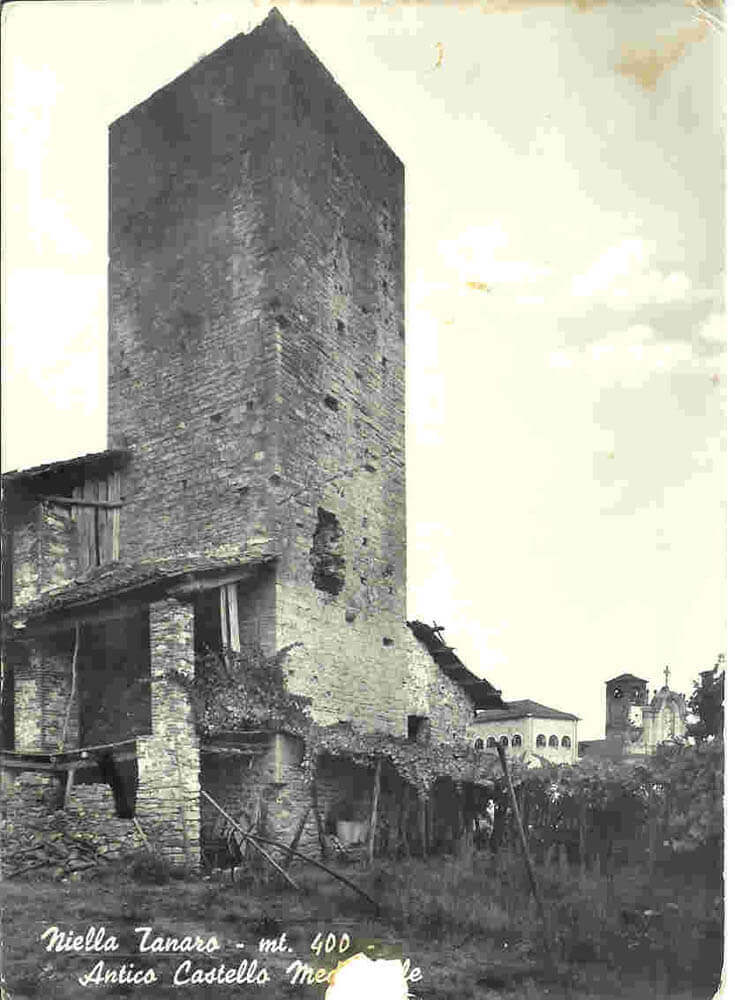